So it's been like 9-10 months since I posted. I check in on LJ every day but usually on my phone so I don't feel like writing posts on there. Let's see, what's happened in the last year... J turned 4 (had a crazy bday party at a gymnastics place with most of his preschool class), trip to the Fargo area in February (yes, February - and we DROVE there) and managed to miss blizzards both ways, and then this happened: 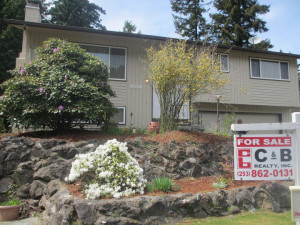 This is our new house :) We closed in late June and move this Friday. It's been a crazy month of work around there getting it ready. The upstairs was painted peach, like the whole upstairs! Even the freaking ceiling in the kitchen was peach! There was peach carpet in the living room/dining room/hallway and pink carpet in the master bedroom. All that came out and we found beautiful 60s hardwood floors underneath. Those have been refinished. We've completely repainted the upstairs. We put in new vinyl in the entryway and the hall in the basement. And carpet in the basement family room. We also added cabinets and counter to the kitchen because it needed it. I'll have to post before/after pics. This place also has a huge yard, so I'm really looking forward to putting in some garden beds next year.

Just saw that John Noble and Jasika Nicole will be guests at 2011 Emerald City ComicCon!

J said his first sentence today - I don't know. He had pushed the dog bed over and I asked him why he did that and he said "I don't know" and shrugged.

It's going to be a glorious day around here today and I refuse to be cooped up inside, even if I'm not completely recovered from the bronchitis.

theemmer is coming by and we're taking J to either Point Defiance Zoo or Northwest Trek. I haven't been to Northwest Trek since a school field trip when I was about 10. But I think J would get a kick out of the tram ride and seeing the animals. Either way we'll be out and about enjoying the wonderful sunshine.

I was sending an email to someone in our IT department... I started to write:

I wasn't even aware of that.

and then changed mid-sentence to:

I didn't know about that.


But what I sent:

I wasn't even know about that.

Hope you have an awesome day!

Kindred by Octavia Butler - This was my first forray in reading Butler. She's one of those authors I always hear I should read but had never gotten around to it. This is a story of a modern black woman being pulled back in time to the slave owning days of the southern United States. It's an uncomfortable story to read and I almost didn't finish it. But that is also what made it such a remarkable novel. I will definitely be reading more of her work. (Fiction)

The Adoration of Jenna Fox by Mary Pearson - Jenna Fox wakes from a year long coma with no memory of the terrible accident that caused it or her life before. It's an interesting story on what makes a person who they are and what risks you'll take to save a loved one. It's a very quick read and I liked the style in which it was written. (YA)

The Graveyard Book by Neil Gaiman -

write_out recommended this one to me. For a children's book, I almost couldn't get through the first chapter - Jack freaked me out! I adored this book. I want further adventures of Nobody. I want to know where he goes and experiences out in the world. I was so sad when he could no longer see the residents of the graveyard. (Kids)

The Gates by John Connolly - Another rec from

write_out (there will be a more of those in the future since she keeps telling me about fun books). Any book that manages to combine opening the gates to Hell with the Large Hadron Collider gets a giant thumbs up in my book. Samuel was a delightful main character. I will be checking out more of Connolly's work. (Fantasy)

Pleasure Model by Christopher Rowley - This book manages to combine Heavy Metal-type illustrations with futuristic noir in a story that is anything but politically correct. It's the first in a trilogy and I almost wished I had waited until all three books were out so that I could read them all together. You're left on a huge cliffhanger at the end and I'm going to hate the wait. (SF)

Ink-Stained Amazons and Cinematic Warriors: Superwomen in Modern Mythology by Jennifer Stuller - This was written by a friend of my BIL. As soon as I heard the title, I knew I had to read it. She examines our Superwomen in print, tv, and movies starting with Wonder Woman and down through present day examples in Heroes. (Non-Fiction)

I realized this morning that for the past two days I had been walking around in one brown shoe and one black shoe.

And that pretty much explains how my week is going...
Collapse